With Bee-eaters, Kites, Black and Red seen around yesterday, Heathy and myself hoped to connect with something, anything.   Starting just after six from the Towers we soon found Two Common Sandpipers and our mate "Sammy", the pigeon.  Having been corrected by Warren and Dylan he has rightly been re-christened 'Sammy', the Feral Friendly pigeon.  Today, 'Sammy' walked another 3 miles with us until he met Steve Ashton and he decided a stroll with Steve back to Cold Harbour seemed a better option on a very hot day.  Marc once again had another redundant day with the camera so being a P.E. Teacher he decided to count as high as he could and got as far as 23 Oysterchatcher, 17 Sedge Warbler and 14 Whitethroat.  'Superlugs' managed to pick up a calling Little Ringed Plover which added to my year list.  The usual suspects of Linnet, Meadow Pipit, Little Egret and Redshank made our notebooks.  There were numerous Yellow Wagtail often sitting invitingly on the op of bushes but as soon as Marc lifted his camera they flew off.  Two Sandwich Tern glided past and as we reached Cold Harbour the first of a few Reed Warbler were heard.  We met up with Steve Ashton who was photographing Whitethroat and after a pleasant chat we left him in charge of 'Sammy'.  4 Tufted Duck took flight over our heads and a Cuckoo could be heard with its distinctive call near the riding stables.  We crossed the railway line an soon added Blackcap and Lesser Whitethroat and the hoped for Turtle Dove was not heard or sighted.  We retraced our steps along the embankment and reached the Sea Wall drawing a blank.  |However, things looked up slightly with a year tick for both of us in the form of Common Tern drifting West.  Two Eider were still sitting in the same place we saw them on Thursday.  A Whimbrel flew along the shoreline and an added bonus came in the form of two Mediterranean Gulls over the Oyster Farm.  After dropping Marc's car off we rung Chris HIndle who had found a Turtle Dove and after a little search we managed to hear and see it.  Then the next two hours were a massive disappointment.  The hours we have put in this year in search of a Red Kite is almost embarrassing.  Not surprisingly we spent a bird less hour at Bishopstone, although Heathy did use his scope for some close investigation of the beach and an hour at Shuart where we watched the grass grow.  Not to worry, we have decided to follow Chris Hindle and Rob Dubbins around in future.
Posted by The Broadstairs Birder at 17:34 No comments:

In the words of Dick Dastardly we could have easily caught it today!  With Heathy mourning the departure of our chums the Shorelarks a new buddy has arrived at Reculver. After escorting Chris Hindle down to Cold Harbour earlier in the week our newest friend "Sammy" the Racing Pigeon followed us down to the fisherman's car park at Chambers Wall, a distance of around 3 miles, walking most of the way!  For a very flattering portrait of "Sammy" see Marc's blog!  Oh, by the way, we did see a few birds today - with my year list adding six new species.  Besides the Pigeon the first bird to make our notebooks was one of four Common Sandpiper.  Yellow Wagtails were more conspicuous today as were Sedge Warbler.  Marc bothered to count 27 Turnstone feeding on the Oyster beds as 3 Eider lounged offshore.  6 Shelduck flew over the Oyster Farm and a single Greenshank made its presence felt. For most of the session any bird that Marc wanted to photograph decided to fly away and tantalisingly out of camera reach and this was the case of both Wheatear and a very smart male White Wagtail.  As we moved inland I soon added Reed Warbler and Cuckoo.  Lots of Whitethroat were seen and a single Lesser Whitethroat made it five new species for the year.  On a very uneventful walk along the Green Wall and back along the Sea Wall a single Whimbrel made the notebook.  Hopefully, we'll meet up with the pigeon again at the weekend.
Posted by The Broadstairs Birder at 19:36 No comments:

RECULVER IN THE SUNSHINE.

With term finishing yesterday and a week in Italy looming today was my last 'birding' for a week.  It was a little surprising, therefore that 'Dances with Owls' phoned me at 5.30 a.m. to let me know that he hadn't in fact found an owl but a very vocal NIGHTINGALE which I managed to connect with after a short drive.  The phone was soon ringing again, and now 'super lugs' had found a GRASSHOPPER WARBLER which we were both listening to before 6 o'clock and with a WHITETHROAT on site we had both added 3 year ticks in half an hour.  In glorious sunshine we made our way to the Green Wall after noting approximately 80 Sand Martin in the Bishopstone Colony with probably the last 2 remaining Brent Geese sitting on the sea.  A group of 12 Turnstone followed us down the shingle and a couple of Ringed Plover were scuttling up and down on the beach as well. Stonechat and Linnet made our notebooks and the first of 12 Sedge Warblers made their presence felt.  After last week's mega of a Yellowhammer, amazingly we found what was probably last week's bird again - Chiffchaff, Blackcap and another Whitethroat were noted.  A year tick in the form of Lesser Redpoll zipped over our heads and as we headed back to Cold Harbour Meadow Pipit, Reed Bunting and four more Sedge Warblers added to our totals.  On a fairly uneventful return walk in glorious sunshine we were despairing in adding to our Year Lists but a familiar sound by the Towers soon revealed 3 SANDWICH TERNS.  We decamped to Shuart in the hope of once again finding a Red Kite but we added only the usual suspects of Marsh Harrier,Buzzard, Kestrel and Sparrowhawk.  But, once again a fantastic session with 6 year ticks added.
Posted by The Broadstairs Birder at 15:59 1 comment:

RECULVER AT ITS BEST. 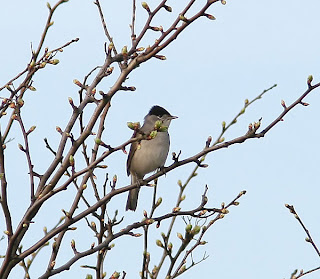 Blackcap -  Thanks to Marc Heath.

There are some day when you are wandering along the sea-wall that you wonder what you are doing. Then there are days like yesterday.  The morning started typically when I spent ages staring at the usual ivy-clad tree in the hope of seeing a Little Owl - with no success.  Even 'Dances with Owls' failed to connect with any of his feathered bretheren.  Arriving at the Towers just after sunrise we said hello to the usual 4 Goldfinches in the trees behind the cafe and counted approximately 40 Sand Martins just waking up in the Bishopstone colony.  A little group of Linnets were feeding by the Oyster Farm and a Greylag flew overhead.  Marc then picked up the first of seven year ticks for me today in the form of a Swallow,  the first of 3 we were to see today.  As we strolled down to the Green Wall - Meadow Pipit, Chiffchaff, Oystercatcher and Turnstone made the notebook.  Two Eider were seen drifting out at sea and the first of two WHEATEAR played "hide and seek" with Heathy and his camera.  At the beginning of the Green Wall we were surprised to find the very unusual spectacle of a singing Stonechat.  Reed Bunting, Snipe, 4 Little Egrets and Skylark made our notebooks and the sight of 11 Magpies flying in off the sea told us there was some migration in progress.
As we started along the railway embankment 'super lugs' picked up a rarely heard call at Reculver and fortunately a few seconds later a YELLOWHAMMER popped out of its hiding place and gave us excellent views.  This was a life-tick at Reculver for me and Heathy's 3rd sighting in about 10 years.  We soon heard the dulcet tones of a Blackcap and crossed the railway line to try and find it passing Chris Hindle on the way.  In finding the Blackcap we also had brief views of a WILLOW WARBLER.  Returning to the sea wall we found a single Goldcrest and five Golden Plover.  Heathy shed another tear when we only found a single SHORELARK, and along the sea wall two YELLOW WAGTAILS sped overhead and another WHEATEAR bobbed about on the rocks and Marc had more luck in photographing this one.  With about an hour's birding left we decided on another stab at finding a Kite as the conditions seemed perfect.  We spent 45 minutes scanning the skies adding Peregrine, Kestrel, Buzzard and Marsh Harrier.  Heathy then picked up 3 Green Sandpipers flying West and seconds later two RING OUZELS, which delighted both of us.  A far closer bird with a very smart white crescent flew past us and with a single BRAMBLING whizzing overhead an almost perfect session was complete.  A big thanks to Marc for his company and his incredible ears !
Posted by The Broadstairs Birder at 17:45 2 comments: