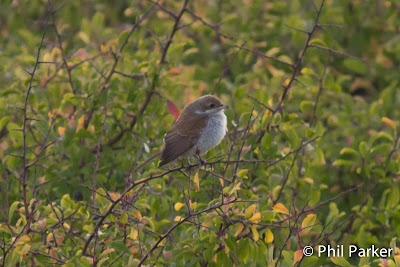 Meeting Marc early this morning at Reculver we hoped for a few migrants to be found during our session.  As I hadn't seen the Juvenile RED-BACKED SHRIKE at the New Downs, Herne Bay we arrived on site just after 6.30 a.m.  As Heathy had already seen the bird twice he knew its favoured spot and we soon re-found it before the hoards of dog-walkers descended.  After a couple of photographs we moved onto Chambers Wall and walked back to the cars via the Green Wall and the railway embankment.  Unfortunately, it was almost bird less and the following list represents two and a half hours effort.  7 Grey Partridge, 16 Chiffchaff, 2 Blackcap, 3 Gadwall with 1 Teal, a lonely Wigeon, 4 Stonechat, 5 Brent Geese, 12 Long Tailed Tit and c200 Black-Headed Gull on the sea by Cold Harbour.  Marc returned home and I made my way to Bockhill in the hope of connecting with a Common Rosefinch.  I stood with Martyn, Mark and Rick Smith for two hours and watched Blackcaps, Bullfinches and Linnets flit across bushes.  Martyn and myself were 80% certain we had it briefly in the company of a Blackcap but perhaps not enough to claim it.  Still, good to see Martyn and Chidders and hopefully he enjoyed his vegetarian lunch.
Posted by The Broadstairs Birder at 19:58 No comments:

HIRUNDINES ON THE MOVE.

Meeting Marc just before 6.00 am. this morning there was anticipation for some seasonal goodies.  Although, there were no unusual suspects today we were treated to incredible numbers of firstly, Swallows and then later in the morning House Martins.  I think a rough estimate of 2,000 Swallows and 1,00 House Martins maybe a little conservative.  We decided to sea watch for a while and in a 2 hour session we recorded the following ; 1 Mediterranean Gull, 2 Teal, 10 Wigeon, 13 Dunlin, 2 Whimbrel, 1 Curlew, c60 Common Tern, 8 Sandwich Tern, 2 LITTLE TERN, 6 BLACK TERN, 1 Brent Geese and a year tick in the form of a solitary GREAT SKUA.  With a lull in proceedings we decided to have a look round the caravan bushes in the company of Julian and Alex Perry.  There were c10 Chiffchaffs and 2 Blackcaps although we were unsuccessful in finding any Flycatchers.  A single Grey Wagtail flew overhead and we returned to have a look from the Towers but added only 2 distant Gannets.  Hopefully, we'll catch up with the rest of the country in the next few days.
Posted by The Broadstairs Birder at 19:45 No comments:

Arriving at Reculver just after 6.00 a.m. this morning, Marc had just beaten me by a few minutes.  We strolled down to Cold Harbour and then inland to Chambers Wall car park and then retracing our steps.  There was a good selection of birds today with small groups of Meadow Pipit and Pied Wagtail noted initially.  We soon added a single Grey Wagtail and unusually a Grey Heron sitting in a bush in the Oyster Farm.  We found a Wheatear on the rocks, one of four today.  As we reached an almost bird less Cold Harbour a juvenile Mediterranean Gull drifted past and as we reached the railway line Marc picked up on a very distant raptor - we dismissed Harrier and both thought Osprey but unfortunately it was too far away to get a positive ID.  Marc took numerous distant spots but this is perhaps one that got away.  Chris phoned to let us know a Spotted Flycatcher was by the sea-wall but we could not refind it.  Meeting Alex and Julian Perry we strolled back to the Towers and we were treated to a RUFF which is a scarce bird in these parts.  I unsuccessfully tried to find a Whinchat  by the Oyster Farm.  Today, is our Black Guillemot day as the Rarities Committee will meet to decide our fate.  As my Reculver year list nudged upwards today, hopefully my Kent list will as well.  To complete today we also added 1 Hobby, 1 Marsh Harrier, 2 Dunlin, 1 Sanderling, 5 Greenshank, 2 Chiffchaff, 2 Curlew and 1 Whimbrel.
Posted by The Broadstairs Birder at 17:53 1 comment:

QUICK, HIDE, HEATH IS BACK IN THE VALLEY! 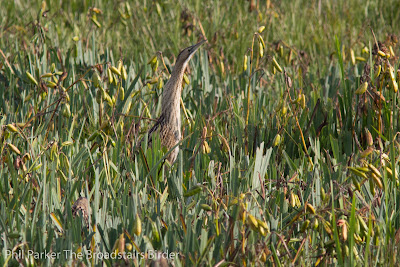 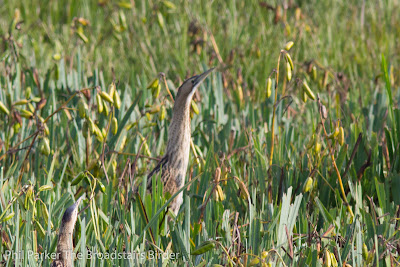 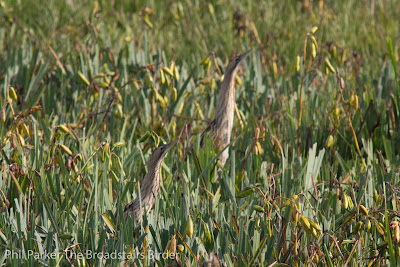 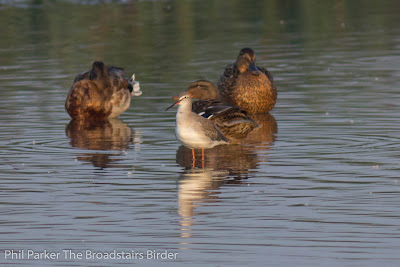 A few pictures of the Bitterns and a lone Spotted Redshank seen in the valley yesterday.
Posted by The Broadstairs Birder at 13:52 1 comment:

HOW GREEN IS THE VALLEY.

Today was a change of venue with a return to Grove Ferry and Stodmarsh in the hope of viewing the Bitterns which have been seen recently.  An early arrival had me walking down the track to the ramp just after 5.30 a.m. joining Marc and Martyn who had been in place a few minutes previously.  Two Tawny Owls serenaded us and the ubiquituous Cetti's could be heard at the bottom of the ramp.  A single Ruff was feeding with the Lapwings on the main lake and two Corn Bunting and six Yellow Wagtail left their roost.  A Buzzard took flight from the bottom of the ramp and on entering the Feast Hide 6 Green Sandpiper made the notebook along with a single SPOTTED REDSHANK.  We strolled to the Marsh Hide with Marc hiding behind myself and Martyn as the big, nasty cows frightened his tiny stature.  A single Wheatear and Stonechat were added along Middle Drove and as we entered the Marsh Hide a single Bittern was soon sighted.  During our hour stay we saw 4 birds which appeared to consist of 3 juveniles and an adult bird.  Along the newly named 'Marsh Warbler' alley a REDSTART  made a brief appearance and a Whimbrel flew over our heads.  We heard a Wood Sandpiper calling but could not locate it.  Along the river we added 7 BlackTailed Godwits on the water meadows and after Marc's departure we added a single CURLEW SANDPIPER on the main lake and a solitary Whinchat and as Marc's text commented 'Thank God for that!' as it was my first of the year.  Great morning, top company, same again next week?
Posted by The Broadstairs Birder at 19:47 1 comment: