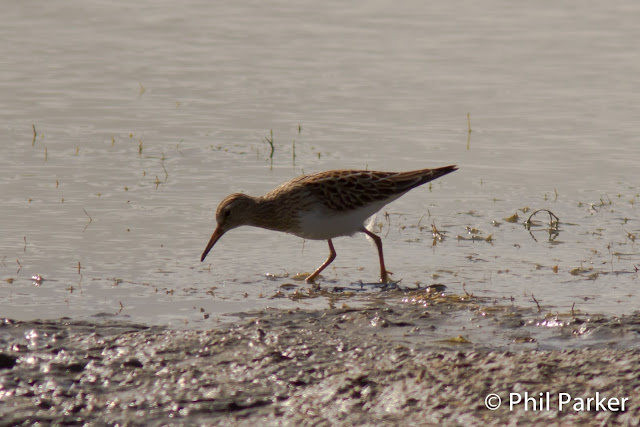 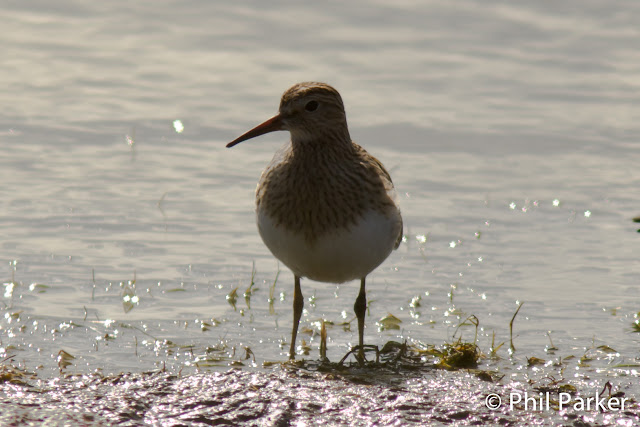 Having endured an extremely quiet period during the last three weeks with hardly anything worth recording I decided that yesterday I was going to try and photograph something...anything. I toyed with the idea of visiting Rainham, but potentially a few seconds of a Baillon's didn't really cut it! After seeing Steve Ray's pictures of Bearded Tits at Grove I thought it would a good idea. However, on arrival it was far too windy and despite constant "pinging" and a few fleeting glimpses it was never going to happen.I managed to locate a single Whinchat posing in the field behind Harrison's and after chatting to Martyn and Alan we returned to the Ramp and added c4oo Teal, 2 Spotted Redshank, 1 Common Sandpiper ,6 Wigeon, 7 Black-Tailed Godwit and a Common Buzzard chased by two Hobbies. Having never been to Backsand Scrape Martyn and Alan chaperoned me there in the hope of connecting with the two Pectoral Sandpipers which had been there for a considerable period of time. It was a fairly long and uneventful stroll. On reaching the hide it appeared birdless,but I managed to pick out one of the Pecs before it disappeared behind an island. We all moved round to the other hide and had fantastic views of both birds . Photography was difficult with the sun directly behind us. However a few images are reproduced above. The walk back had two Hares speeding past us. Thanks to Martyn and Alan for a really enjoyable few hours. I didn't even mind missing the Sabine's at Reculver.
Posted by The Broadstairs Birder at 20:12 1 comment: