WHAT A DIFFERENCE A SHAG MAKES !

Apologies for the 'Carry On' style heading but adding a Shag to the Reculver year list really was the highlight of yesterday.  Arriving at the Towers just after seven the 'Owl Whisperer' had only just arrived allowing himself the luxury of a lie-in.  Fortunately, he had availed himself of the facilities at his home and we started a fairly pointless sea-watch.  The poorly Eider that 'Batman and Robin' had spotted earlier in the week drifted past and small groups of Brent made their way to Cold Harbour.  After last week's Diver fest only 3 whizzed past along with small gangs of Oystercatcher, I fortunately picked a Shag out flying east which at least livened up our first half-hour.

We decided to try our luck at Minnis Bay and a stroll to the riding stables was fairly fruitless.  Marc picked out a Kestel which was sitting on top of the main stables and as we looked out over Shuart I saw the HOODED CROW fly over the railway line and alight in a nearby field.  Heathy dusted the cobwebs off his camera and tried to photograph the Crow which then promptly flew off in the direction of the Oyster Farm.  We reached the sea wall and scanning the beach Marc found the second HOODED CROW feeding with his more common brethren on the mussel beds.  We walked along the tide line and Marc happily fired off lots of shots of Sanderling, Turnstone, Grey Plover, Ringed Plover and anything that moved.  Thanks very much for the photos underneath and hopefully next week I'll nail that elusive Jackdaw. 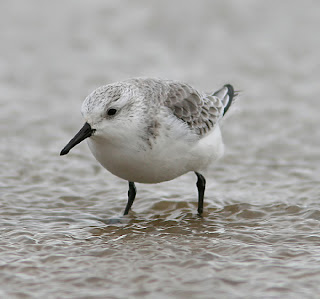 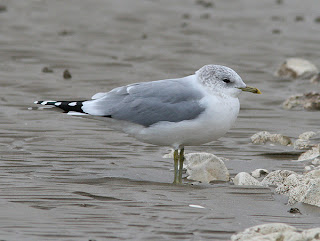 Posted by The Broadstairs Birder at 17:31