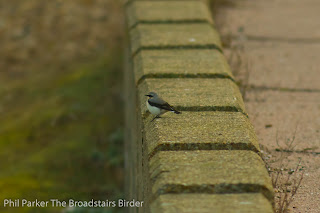 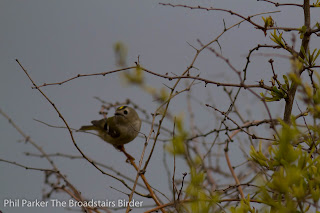 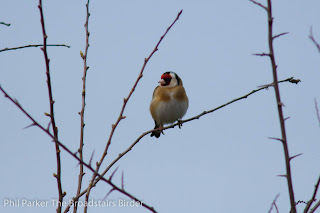 With a trickle of migrants arriving during the week Marc and myself hoped for a few birds to make their way to Reculver yesterday.  I met Marc in the half-light with the now weekly quest of adding Little Owl to my year list.  Heathy assured me he had seen one flit from one ivy-clad tree to another... I didn't, but I always bow to the 'Owl Whisperer's' almost canny intuition.  However, I did manage to see the six Sand Martins performing over Bishopstone 'cliffs' and we began our walk to Cold Harbour.  A lone Brent Geese sat almost apologetically on the sea with a couple of Cormorants and four Great Crested Grebes.  A smart male WHEATEAR popped up on the seawall and allowed both of us to take some fairly distant photographs.  For my 50th birthday I have joined the camera club and decided to take some inept pictures.  So rather than nicking Heathy's best efforts you'll be able to laugh at mine each week.  We reached Cold Harbour adding all the usual suspects except the SHORELARKS.   Marc wiped a tear from his eye and searched desperately in vain.  Fortunately, Julian and Alex Perry had found them later in the morning which allowed 'Dances with Owls' a warm smile. We walked in land and along the Green Wall and recorded almost nothing.  On reaching the Towers again we made contact with probably the same WHEATEAR.  On the rocks the other side of the Towers two BLACK REDSTARTS put in a very brief appearance and promptly disappeared.  After a coffee break we returned and found them a little more accommodating.We  both took pictures of a "flat headed" Goldcrest and Marc made his way home after pointing out a single Fulmer drifting West.  I met up with Derek Smith in Shuart lay-by and spent 45 minutes in search for raptors adding Marsh Harriers, Kestrel and some distant Buzzards over Thanet Earth.  I returned home to watch the European Championship match from Cardiff and the slaughter in Colombo.  Still not sure who's the most abject international sportsmen  - Luke Wright or the Welsh International football team minus Ramsey and Bellamy?
Posted by The Broadstairs Birder at 14:54