BLUE IS THE COLOUR. 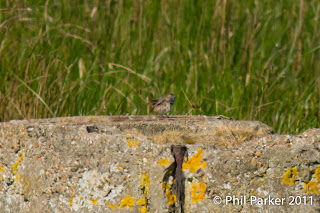 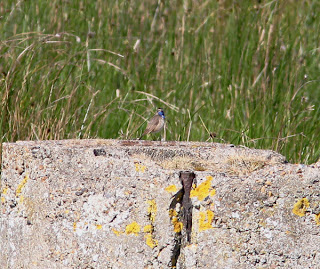 With an early morning start at Shuart, Marc and myself strolled down to the sea wall via the riding stables hopefully seeing the Spotted Flycatchers which Chris Hindle had found yesterday and perhaps even a Garden Warbler.  At the end of a two hour session we had a very sparse list which included eight Whitethroat, two Lesser Whitethroat, one Sedge Warbler, one Cuckoo, two Marsh Harriers, two Yellow Wagtails, two Turtle Doves and a Sparrowhawk.  We had decided to go to Dover Heights to find Small Blue butterfly and started to make the journey.  However, all roads did not lead to Dover as all the roads between Lord of Manor traffic lights and Richborough were guarded by police or closed.  Deciding to go via Grove we received a text from Murray Wright that a White Spotted Bluethroat had been found at Oare Marshes.  Arriving just in time to look through Murray's scope we had good but distant views of this sparkling male.  As you can see from the fairly inept record shots it is a bird with a blue throat.  The bird showed on and off for about an hour while we were there and then promptly disappeared as more people arrived.  During our stay three Buzzards and one Hobby also made the notebook.  Big thanks to Murray for the text and for definitely saving the day.
Posted by The Broadstairs Birder at 21:15