A LITTLE OF WHAT YOU FANCY? 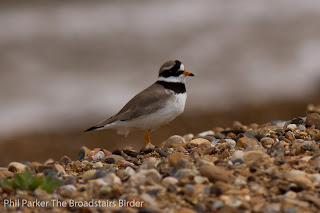 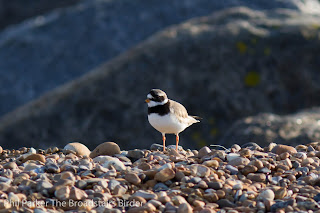 Arriving at Reculver just after 5.30 a.m. this morning I was slightly startled to see a small man wandering around the caravan park with a camera and telephoto lens.  I was just about to phone 999 when I realised it was Marc.  Within 5 minutes I had managed to find out the reason for his prowling around the caravans when I added LITTLE OWL to my year list.  Apparently the 'Sun's' offer of a £9.50 holiday was just too good to miss and Mr Owl had chosen a particularly luxurious static home.  We strolled down to the Green Wall with my camera getting an outing -: (see Ringed Plover photographs).  At sea a few Sandwich Terns, Common Terns and two Curlew drifted past.  We met Derek Smith and chatted while Whitethroat, Reed Warbler, Sedge Warbler and Cuckoo interrupted our conversation.  An unseasonal Siskin and 9 Lapwing flew overhead and as we retraced our steps we added only Turnstone and Sanderling.  On returning to the caravan park Marc tried to locate the Little Owl but he had obviously gone out for the day.  However, we did manage to relocate Heathy's conquest from last week and fortunately for me she had more clothes on, but this was obviously a massive disappointment to him.  I managed a record shot as Warren asked for photographic evidence.  We returned home both satisfied with the morning's events.
Posted by The Broadstairs Birder at 19:08