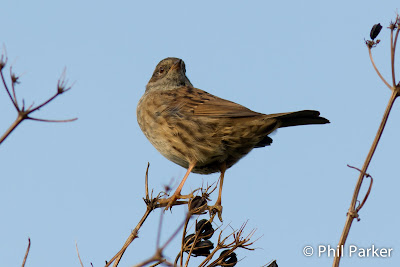 Arriving in the dark yesterday morning at Reculver it was hoped that one or two migrants would be around.  Unfortunately there was very little on offer.  Two Little Owls were happily sitting on top of the toilet block in the caravan park and a Fieldfare whizzed by the towers.  On a very uneventful stroll down to the Green Wall all the usual suspects were noted in the following numbers.  Kingfisher 1, Reed Bunting 8, Wheatear 2, Little Egret 4 , Rock Pipit 1, Golden Plover c35, Brent Geese c100, Curlew 1, Redshank 6, a very late Swallow and nine Lapwing.  An hour around the caravan park bushes produced some angry Blackbirds and numerous Goldcrests that seemed impossible to photograph.  A trip to Grove in the afternoon was more successful with good but distant views of the Glossy Ibis.  Meeting Ann and Chris Hindle on my stroll to the Marsh hide, the bird  was a little elusive at the beginning but regularly emerged from ditches in the middle of the viewing area.  I was certainly not so lucky as Steve Ashton to have it just under my nose.
Posted by The Broadstairs Birder at 20:05