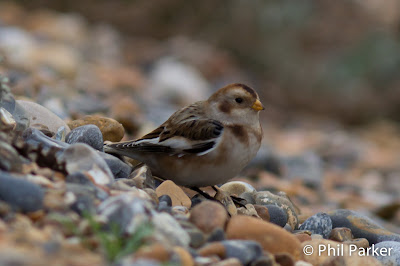 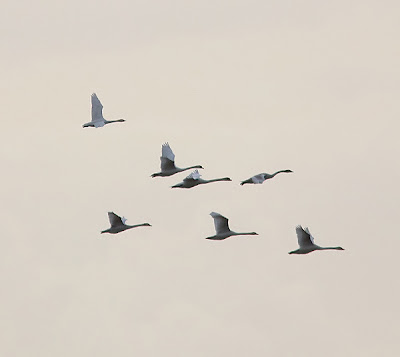 Sincere apologies for posting retrospectively but the weekend was extremely hectic and I've only just managed to write up Saturday's sightings.  Arriving at the Towers just before 7.00 a.m. Marc was already in position having strolled around Shuart in the hunt for owls.  The day didn't hold a great deal of hope or anticipation.   The morning began with groups of Brent Geese travelling down to Cold Harbour.  Heathy's favourite bird, Oystercatcher whizzed past in groups of 2, 3s and 4s.  As we reached the Oyster Farm, Little Egret, Redshank and Meadow Pipit made their presence felt.  A single Common Scoter flew past and a Redbreasted Merganser was feeding by the mussel beds.  As we reached Cold Harbour a juvenile Peregrine was hunting unsuccessfully over the fields and a Marsh Harrier sat in the field eyeing a group of Lapwing and Golden Plover.  We managed to find a group of 15 SNOW BUNTINGs along the shingle ridge but they were very flighty and only a few pictures were obtained of them on the ground.  On our return a MERLIN was chasing a passerine - unsuccessfully again.  Marc picked up two distant grey geese which appeared in the field and to our delight they turned out to be a single WHITE-FRONT and PINK FOOT.  We phoned Chris and Ann and they returned to see them on the embankment and also on cue seven Mute Swans flew past with a BEWICK SWAN attached.  Three year ticks in five minutes and Bewick being a new bird for the area for both of us.  In the fields we managed to find the PALE BELLIED BRENT in with the large flock of Dark Bellied and as we reached the rocks a BLACK REDSTART made a brief appearance.  A fantastic session and only a Black or Red Necked Grebe to find now!
Posted by The Broadstairs Birder at 18:20